Nearly all Americans today benefit from assistance from government at some point in their lives, and the average person receives a higher portion of income from federal social policies than ever. Yet, Americans’ attitudes toward government are dismal and have worsened over time. Those who live in some parts of the country that most rely on social benefits elect public officials whose aim is to eviscerate such policies. Suzanne Mettler explores this “government-citizen disconnect,” describing the form it takes and probing its causes. 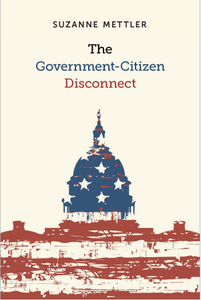 Suzanne Mettler is the John L. Senior Professor of American Institutions in the Government Department at Cornell University. Her research and teaching interests include public policy, American political development, political behavior and civic engagement, and inequality.

Mettler is the author of five books, including The Government-Citizen Disconnect (Russell Sage 2018); Degrees of Inequality: How The Politics of Higher Education Sabotaged the American Dream (Basic Books 2014); The Submerged State: How Invisible Government Programs Undermine American Democracy (University of Chicago 2011); Dividing Citizens: Gender and Federalism In New Deal Public Policy(Cornell University Press 1998), which was awarded the Kammerer Award of the American Political Science Association (APSA) for the best book on US national policy and the Derthick Award for a book that has made an enduring contribution to the study of federalism; and Soldiers to Citizens: The G.I. Bill and the Making of the Greatest Generation (Oxford University Press 2005), which was also awarded the Kammerer Award as well as the Greenstone prize of the Politics and History section of APSA.

She has also served as the co-editor of two additional books, published many book chapters and articles in scholarly journals, and written shorter pieces for a broad audience for publications including the New York Times, Los Angeles Times, Chronicle of Higher Education, Washington Monthly, Foreign Affairs, Slate, and Salon. With Larry Jacobs, she is conducting an ongoing panel study of public opinion on the Affordable Care Act, begun in 2010.

Mettler serves on the steering committee of the Scholars Strategy Network. Previously, she served as secretary of the American Political Science Association and president of the organization’s Politics and History and Public Policy sections. She has been elected to the American Academy of Arts and Sciences and the National Academy of Social Insurance.

In 2017, Mettler initiated the American Democracy Collaborative, a group of scholars of American political development and comparative politics who are evaluating the prospects for regime change in the United States.